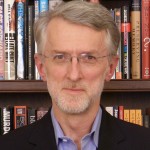 He advocates that speakers give a bit of content from the platform and then take advantage of the collective wisdom in the audience. In fact, his keynote speech incorporated that element of give and take.

If you think about it, it sounds like what you’d expect a college professor to say. And Jarvis does teach media course at CUNY. Teachers teach a point and then ask students for opinions, reactions to hypothetical situations and to debate points from the readings. Learning becomes a shared experience.

I’ve used this format in my speeches and training. When I taught a class in public relations at Berkeley, all the students in my class held full-time PR jobs with the city, large non-profits, arts and prestigious technology companies. There was a wealth of information in that room and we all learned from each other.

The evaluations from that class were nearly uniformly glowing. One person hated that system as she wrote in her evaluation, “I paid good money to hear Professor Janal teach but everyone else in the class couldn’t keep their mouths shut.” She didn’t get it.

And neither did many speakers who commented on Jarvis’ insights.

They thought they were the main show. In some cases, it is hard to disagree. Many speakers have something to say and they are getting good money to say it. And some people in an audience love hearing the sound of their own voices even if they have nothing to say. We’ve all seen extremes on both sides.

Audiences have changed the model, even if some speakers haven’t seen it.

Audiences are asking questions in person and, with their mobile devices, posting info on social media sites. They are also checking facts as soon as the speaker utters their messages. If they are wrong, they are dismissed.

To argue that Jarvis is wrong is superfluous. It’s like arguing that a tsunami is not coming when you see the storm patterns brewing.

Audiences have changed and speakers need to change with them.

In fact, Jarvis wasn’t the only speaker to urge presenters to change their style. Several experienced speakers who offered mentoring sessions to other speakers, noted that the Broadway theatrical style of speaking is not connecting with audiences any longer.

Otherwise, they will be victims of the tsunami.

What do you think? Should speakers talk less and facilitate more?