Is Ralph Lauren Bigger Than the Olympics?

Is Ralph Lauren Bigger Than the Olympics?

Check out the new duds the U.S. Olympic athletes will wear at the Winter Games in Vancouver.

You’ll see a flag of the United States on one side and a HUGE logo for Ralph Lauren’s Polo.  It might be the camera angle, but the logo looks bigger than the flag. What do you think?

In fact, if you look at the camera angle, the logo is featured, not the flag. 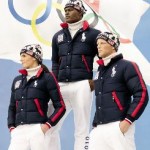 The picture ran in USA TODAY. The article didn’t say if Ralph did this out of the goodness of his heart, or if he paid a fee to sponsor the uniforms. If the former, I wonder how much he paid.

If the money is going toward Olympic athletes’ training, I guess I can’t complain for the big plug. However it does raise the question of how many more logos we’ll see on future uniforms. Will they rival the outfits of NASCAR drivers? Time will tell.

In the meantime, I’m going to buy the cool hat with the moose.